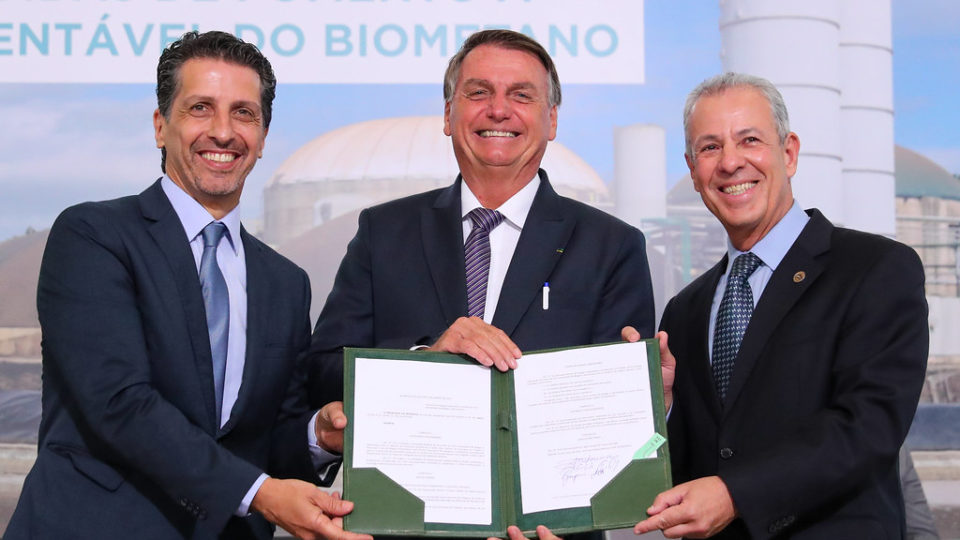 President Jair Bolsonaro alongside Minister of Mines and Energy Bento Albuquerque and Minister of Environment Joaquim Leite at the launch of the decree that establishes the incentive for the sustainable use of biogas and biomethane .| Photo: Isac Nóbrega/PR.

The federal government launched this Monday (21) measures to encourage the production and sustainable use of biomethane and exemptions for biogas projects. Renewable fuel is obtained by purification of biogas and can replace fossil fuels. The initiative responds to the commitments assumed by Brazil at the 26th United Nations Conference on Climate Change (COP-26), including the Methane Agreement, informed the General Secretariat of the Presidency of the Republic.

The document, signed by Brazil and more than a hundred countries, sets out a global effort to reduce methane emissions by 30% by 2030 compared to 2020 levels. Environment Minister Joaquim Leite, signed an ordinance that creates the National Program for the Reduction of Methane Emissions, Methane Zero, which will represent advances in the generation and use of biomethane from urban and rural waste.

“The Zero Methane program deals with urban garbage, rural garbage. It’s waste from birds, pigs, sugar cane, dairy products and sanitary landfills. All of this to generate biogas, which generates energy, and biomethane, which generates fuel for heavy vehicles. We will have the ability to drive biomethane-powered trucks, tractors and buses, which lowers the cost of fuel,” Leite said.

Mines and Energy Minister Bento Albuquerque signed an order that includes biomethane investments in the Special Infrastructure Development Incentive Regime (Reidi). The order will exempt new projects from charging PIS/Cofins for the acquisition of machinery, building materials and equipment.

The total planned investment is over 7 billion reais, with the creation of at least 6,500 jobs, in the construction and operation of the new units. The idea is to build 25 new factories in six states (SP, RS, SC, GO, MT, MS). At the launch event of the measures, President Jair Bolsonaro (PL) said that in a short time the country will be able to have the equivalent of four times what it receives from Bolivia in gas, without taxes.

“If the rural man is going to do something to generate energy, he will not pay the PIS, the Cofins, nor the Tax on the Circulation of Goods and Services. line that we have with taxes”. With information from Agência Brasil.

Zelensky cites the Holocaust and asks for help from Israel