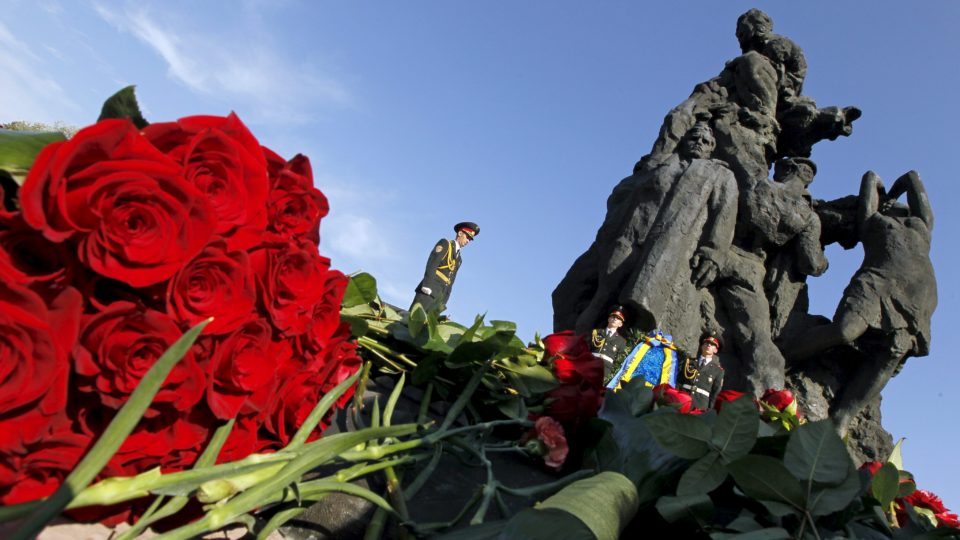 Ukrainian soldiers pay respect to the victims of the Babi Yar massacre in 2012 | Photo: EFE

The Russian bombing of the television tower in Kiev, which took place last Tuesday (1), ended up damaging an important monument, a symbol of Ukrainian suffering under totalitarian regimes. Located next to the tower, the Babi Yar Holocaust Memorial Center was hit by Russian armed forces. According to the Ukrainian government, at least five people were killed in the attack. The severity of the damage to the monument has yet to be revealed.

The country’s president, Volodymyr Zelensky, spoke on the subject on his Twitter account: “To the world: what’s the point of saying ‘never again’ for 80 years if the world is calm when a bomb falls in the same place as Babi yar? At least five dead. History repeats itself,” he wrote. Understand, below, what Babi Yar was – the massacre of Ukrainian Jews by Nazi Germany that attempted to be covered up by the Communists.

“Hitler’s troops occupied Kiev on September 19, 1941, and from the first day they began robbing and killing Jews. We lived in terror. When I saw the posters on the streets of the city and read the order for all Jews in Kiev to gather at Babi Yar, deep in my heart I felt the problems. I understood that nothing good awaited us there. So I dressed my little ones, a 3 year old girl and a 5 year old boy, put their things in a small bag and took it to my mother-in-law. Then I picked up my sick mother and, following the order, we set off for Babi Yar.

Confirming the fears of actress Dina Pronisheva, a Ukrainian-born Jew married to a Russian soldier drafted into the war, nothing good awaited the Jews of Kiev in the ravine that led to the first mass extermination promoted by the Nazi Germany. A month before September 29, 1941, about 23,000 Jews had already been shot in Kamenets-Podolski, a Ukrainian town near the Hungarian border. What happened at Babi Yar, however, ushered in the systematic slaughter that would become the Holocaust: an estimated 33,700 Jews were slaughtered in 48 hours, according to data from the Nazi team itself. “It was the first time in history that a premeditated murder had virtually wiped out the entire Jewish population of a major European city,” said historian Karel Berkhoff.

Reports like Dina Pronishva’s are rare. From the Nazi occupation of Ukraine to the Soviet takeover in 1944, nearly 1.5 million Jews were murdered in the country. Nearly 80% were shot, a “modality” of extermination that will lead to the creation of the term “Holocaust by bullets”. These genocides, perpetrated by extermination groups called Einzatsgruppen, have long been eclipsed by the profusion of denunciations of the “Gas Holocaust” practiced in the notorious Nazi chambers. French priest Patrick Desbois was one of the first to delve into the untold story of Jews killed in the Soviet Union, victims whose graves were hidden by the Nazis and later ignored by the Soviets.

Stories like that of Dina Pronisheva give a dimension to the horror. “A policeman told me to undress and pushed me to the edge of the grave, where a group of people awaited their fate. Before filming started, I was so scared that I fell into the well. I came across corpses. (…) The shooting continued; people were still falling. I came to myself – and suddenly I understood everything. I pretended to be dead, above the dead and wounded. Suddenly, I heard a child shouting, “Mom! She looked like my little girl. I started crying,” said the actress during the trial of fifteen German soldiers in 1946.

The end of World War II was not enough for the Jews killed at Babi Yar to be recognized and honored as victims of the anti-Semitic genocide. It took a few decades for those massacred there to receive their due honor, thanks to the Soviet obsession with perpetuating the idea that all peoples under the Kremlin suffered Nazi horrors “equally”.

First, there was the erasure: the Babi Yar ravine was literally backfilled and filled with industrial waste. In 1961, it was the scene of a landslide that killed hundreds and dumped mud, water and human remains from a dam onto the streets of Kiev. Years later it turned into an apartment complex.

Then came the distortion. In the 1960s, the place began to be treated as a memorial to a story told through the Soviet lens. This is how the Ukrainian writer Viktor Kekrasov recounts:

“It all happened like this – people came, cried and spread flowers around them. [de Babi Yar]. There were no crowns, or where to put them. There was no monument or obelisk – just bushes and tall grass. But from September 1966, everything changed. A stone appeared – polished gray granite with an inscription that was edited and approved by all relevant authorities, saying that on this site of mass murder a monument would be erected for “Soviet civilians”. [que foram assassinados] during the period of temporary German fascist occupation from 1941 to 1943’”.

“Now, every year on September 29, next to the stone, a podium is installed and from there the secretary of the Shevchenko county party committee gives a speech, which is mainly devoted to the achievements of the district entrusted to him in building the estate and fulfilling the plan [oficial] in several areas. Then there are the speeches of several production executives, among whom must necessarily be “one of Jewish nationality” (one cannot simply say “a Jew”), who would speak of the “bestial atrocities” of the Zionists in Israel” , says the writer, recounting the Soviet feat of transforming a monument of homage to the Jews into an anti-Semitic event.

It was not until 1991, when Ukraine gained independence, that the Babi Yar began to feature in school textbooks and in public debate about Holocaust remembrance. There is currently a large museum under construction in Kiev, the project of which is directed by Father Desbois. For the religious, the site must offer visitors a similar experience to the Auschwitz camp, with lists of victims and their murderers. “We need to make it feel like the scene of a horrific crime again.